Contact Us
603.286.8901 Info@SpauldingServices.org
Stay in the Know
Campus Location 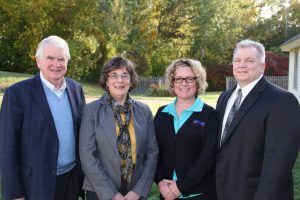 At the October annual meeting Ventura was elected Chair of Spaulding Youth Center Board of Trustees, succeeding James Clements in that role; and Hali Dearborn was elected Chair of Spaulding Youth Center Foundation Board of Directors, succeeding Ventura. Both of these newly-elected officers have served with distinction as Board members, highlighted by co-chairing a successful $3.2 million capital campaign to build a new school at Spaulding.

Noting the Board’s acceptance, with respect and regret, of Susan Calegari’s resignation, Ventura stated, “During Susan’s 10-year tenure, first in her role as Vice President for Development, and in the past six years as CEO and President, she has skillfully led with determination, commitment to excellence, and good humor. Her tireless leadership of the new school building project and capital campaign; her deft management of the leadership team during a time of program growth and expansion; her diligent stewardship of resources and finances; and her keen understanding of the importance of strong staff, Board, donor, referral source, and community relationships are but a few of the hallmarks of her time at Spaulding. Jim Clements, Hali Dearborn and I could not be more effusive in our praise; and we are also pleased that she has agreed to take on a newly created position of Chief Innovation Officer after she takes a well-deserved break.”

Ventura continued, “In addition, Hali Dearborn and I are delighted to announce that Jim Clements has been selected to succeed Susan as CEO and President. I know we speak on behalf of all Board members that we could not be more pleased with the outcome of this leadership succession process. A lifelong educator and school administrator, many know Jim in his most recent role as Head of Tilton School, and all of us know him as a thoughtful leader and enthusiastic advocate for young people.”

Clements added, “Though our roles have changed, the four of us are energetically committed to ensure strong leadership at the board and executive levels and to the continuity of excellence in services to children and their families. Spaulding is poised for growth and we enthusiastically look forward to the opportunities and possibilities which await us.”

Spaulding Youth Center’s mission is to leverage its professional expertise to help young people with autism or other developmental and/or behavioral challenges learn the academic and life skills needed to be successful in their homes, schools and communities.

For information about Spaulding Youth Center and Foundation, contact Gail Mayhew, Director of Development, at 603-286-7500 ext. 532; GMayhew@SpauldingYouthCenter.org or visit www.spauldingyouthcenter.org.

If you are interested in an insider's view of a day in the life of Spaulding Academy & Family Services, we recommend visiting our online photo gallery or our video gallery. These are updated weekly so keep checking back for more great Spaulding moments!