About Us
Contact Us
603.286.8901
Info@SpauldingServices.org
Stay in the Know
Campus Location

Spaulding Academy & Family Services, founded in 1958 with the merger of the Daniel Webster Home (1871) and Golden Rule Farm (1914), is one of the oldest child care facilities of its kind in the country – over 150 years and counting.

With a history spanning over 150 years, Spaulding Academy & Family Services is one of the oldest organizations in the nation serving children in need. Our legacy began in 1871 as the New Hampshire Orphans Home and School for Industry, which later was renamed as the Daniel Webster Home. This organization merged with the Golden Rule Farm in 1958 to become Spaulding Youth Center (Est. 1914). To best represent the evolution of available programs and services, the organization became Spaulding Academy & Family Services in 2020. Since 1871, we have supported over 46,000 exceptional children and family members toward a successful future. Click here to check out historical images in our 150th Anniversary Facebook album.

The New Hampshire Orphans Home and School for Industry was founded by Chaplain Daniel August Mack and incorporated on July 7, 1871. The original homestead included part of Daniel Webster’s Elms Farm in Franklin, NH and consisted of 183 acres. Eventually, this organization for destitute and homeless orphans was renamed to Daniel Webster Home. In 1960, the original site was purchased by the Sisters of the Holy Cross.

As a founder of the Good Will Institute in Nashua, Reverend George W. Buzzell received a gift of the 100-acre Roberts Farm, the original home of Mrs. Colby, Daniel Webster’s sister. He established a cottage method of homing there in 1901 and this farm became known as the Bradley Memorial Home. In 1914, the Bradley Memorial Home was joined to the Golden Rule Homestead, increasing its size to 400 acres in the Pemigewasset Valley between Hill and Franklin. The resulting organization was called the Golden Rule Farm and was known as “New England’s Own Boystown” serving boys from inadequate homes. Over the next decade, the need for orphanages was eclipsed by the need for a corrective setting for urban children, who at this time were sent to prisons and reformatories. Thus, the Golden Rule Farm made a transition from cottage care to rehabilitative care.

When the Franklin Falls Dam was built in 1939, the Golden Rule Farm was forced to move and the Boynton and Holquist Farms in Northfield were purchased as a new home.

Later, “the top of the hill” along with a mansion were added to the farm. The original building was destroyed by fire and only the flag pole survived. The flag pole still proudly stands behind the Spaulding Community Center, which was originally built as the Pangburn School on the same site.

In June of 1958, the Daniel Webster Home and Golden Rule Farm merged, pooling assets and resources to create Spaulding Youth Center. The mission of this new organization was to provide care and treatment to youth with emotional and behavior problems, thus preserving a tradition of caring for needy children that began shortly after the Civil War.

Today, Spaulding Academy & Family Services is a leading provider of educational, residential, therapeutic and foster care programs and services for children and youth with neurological, emotional, behavioral, learning or developmental challenges, including Autism Spectrum Disorder and those who have experienced significant trauma, abuse or neglect. Our campus is located on over 500 acres in Northfield, NH and welcomes boys and girls from 5 to 21. As a private 501(c)(3) non-profit organization, Spaulding Academy & Family Services continuously develops programs, services and expertise in response to changing needs of children and youth who need a place where they can learn, grow, play and heal. Within our intensive therapeutic setting, the professional staff instills study, social, independent living, and career education skills, and an appreciation of learning that helps each child reach his or her full potential. At Spaulding Academy & Family Services, we believe that every child deserves a childhood. 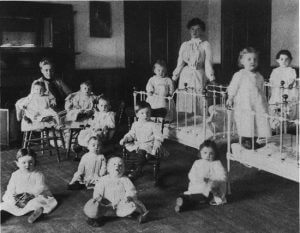 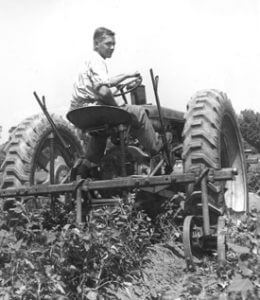 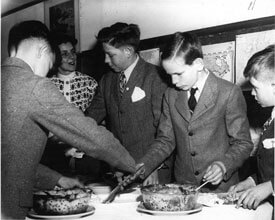 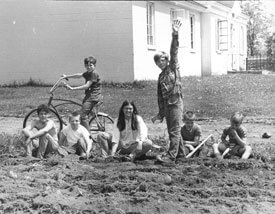 Planting the garden at Spaulding, 1969.

If you are interested in an insider’s view of a day in the life of Spaulding Academy & Family Services, we recommend visiting our online photo gallery or our video gallery. These are updated weekly so keep checking back for more great Spaulding moments!